Just came back from Texas this morning. That was a looong road trip (20 hours) but it was worth the drive to see my family- especially my grandparents. They're the only ones I have and they aren't getting any younger.

On Halloween we went to a high school football game in Texas. My cousin is on the drill team so we really went to see her perform at half time but the game was a bonus. Unfortunately we didn't get the whole "Friday Night Lights" experience because it was a Thursday, on Halloween, the team they were playing was from 3 hours away, and my aunt explained that team isn't very good.

It was still a great game though and really, for being a during the week game...there was still a lot of energy. The opposing team's band was loud and full of energy and absolutely made up for the lack of fans they had. As far as the home team...wow! Very different experience from the high school football games up here. There's a fence that separates the fans from the moment they enter the stadium. My aunt also explained that the drill team needs chaperones, dads really, to act as security because opposing schools will taunt and harass the girls as they go to take the field for performances. Insane.

The band did an awesome little medley of the Time Warp and Thriller which was great. It also included the drill team and the cheerleaders. The drill team did an awesome job. I've never seen a drill team perform (another thing that isn't common up here). Their uniforms are mind blowing:

We had a really good time and the weather was beautiful.

I have mosquito bites all over my legs. Something I'm not used to in October. I bought cowboy boots while down there :D I can't wait to wear them. It was amusing that while we were down there, whenever where we were from came up we would say "Illinois" and they would repeat, "Illinoise?" No. Illinois. The s is silent. We never corrected them; we thought it was cheeky.

One of the days we went to the ocean. 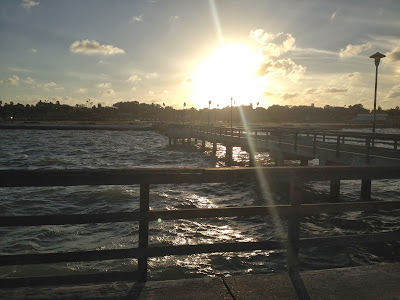 It was super windy and when I brushed my hair out later a giant knot just broke off even though I used detangler. Lots of detangler.

Tomorrow it is back to the routine. My workout partner and I already have a plan to meet up tomorrow and then I have my shopping list for the grocery store so I can make my meals for the week.

Jen
My passions include unicorns & the Backstreet Boys. And Boston Terriers.